We have had a change in our lives and cruising plans, our daughter passed away leaving behind her husband and two small children ages 2 1/2 and 8 months. With that happening we have decided to sell our boat, and our home in Florida and move to the Seattle area to help her husband raise them. It has been a wonderful life cruising the East coast and the Bahamas but this is something we must do. We will miss all of the wonderful friends we have met while cruising, and all of our friends in the Abacos, our favorite cruising grounds. So a new chapter in our lives opens and new adventures begin.


P.S.
Who knows, there may be another Missinglink in the future. You never know
Posted by Missing Link at 12:35 AM 1 comment:

Lake Worth to Green Turtle.

We left the Lake Worth Inlet on Thursday afternoon on the way to Great Sale Cay with two other boats, Lee Ann and Madeline. We had a good crossing, about 4 ft swells with a 12 second period on our stern quarter. It wasn't a great crossing, but it wasn't bad either. We arrived about 3 AM and dropped the anchor for about 4 hours of sleep.
The next morning after a quick breakfast and a top up of our fuel from the jerrycans we keep on the deck we raised the anchor and started off for Spanish Cay. On the way there Chris baked a cake for the skipper of Madeline as it was his birthday and we wanted to celebrate his birthday and his first trip to the Bahamas. We arrived there around 4 in the afternoon, tied up at the dock and checked in at the marina and then went to bed to catch up on sleep. When we awoke the next morning refreshed we checked in with Immigration and customs and took a short walk around the island. When we got back we found out that Michael on Madeline was refused entry into the country. He did not have a passport, but he had called customs two weeks earlier and had been told that if he had a valid ID and birth certificate there would be no problem. While we had been traveling apparently the Bahamas changed that policy 2 days previously and he now had to return to the U.S. They did let him stay at the marina to prep his boat for the return trip, but it was sad to say goodbye to him. We did have a great dinner that night and were able to celebrate his birthday in the Bahamas. The next afternoon we saw a fisherman catching lobsters on the break wall around the marina so we hailed him and made a deal for 15 lobsters. That night the new managers of Spanish Cay cooked them up and we had a lobster feast with them and the other boats, of course since I am allergic to shellfish I had grouper.
This morning we set sail for the short 20 mile sail to Green Turtle cay with Lee Ann, where we now are. We took a dock at the Bluff House where they are having a dockage special where you spend two days and get the third free. Also the rate is only 90 cents a foot, so it is a good deal. We spent the afternoon catching up with old friends and meeting new ones at the new beach bar that the marina recently opened, great fun.
In a couple of days we hope to start out for Marsh Harbour Marina and Jibroom, that's all for now.
Posted by Missing Link at 7:24 PM No comments:

Finally on the move.

We left Titusville this morning with two other boats and are finally on the way South and over to the Bahamas. Presently we are in Melbourne FL and plan to stop at Ft Pierce tomorrow, and then on to Lake Worth where we will wait for a good forecast to cross the Gulf Stream and enter the Bahamas banks. We plan to anchor at Great Sale Cay to rest up , and then on to Spanish Cay where we will check in with customs and immigration.
Posted by Missing Link at 3:32 PM 3 comments:

We presently at Westland marina preparing for our trip to the Abacos in The Bahamas. We have finished prepping the boat and are ready to start down the ICW to Palm Beach where we will cross the Gulf Stream to the Bahama banks and on to Abaco. We made many repairs to the boat over the last year and are ready to start out. Our first stop will be Melbourne, then Ft Pierce, and the final stop on the ICW will be Old Port Cove in North Palm Beach.
Posted by Missing Link at 7:40 PM 1 comment: 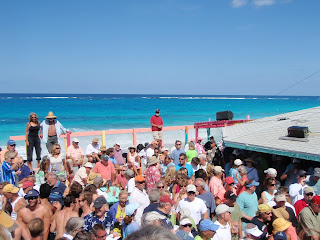 We left Marsh Harbour marina this afternoon and are now at Orchid Bay Marina on Great Guana Cay. This afternoon was the early concert, and tomorrow will be the evening show. We had a great time this afternoon with most of the boats from Marsh Harbour Marina and others from all over Abaco. There was a big crowd and we had perfect weather, blue sky, not too hot, and the ocean was perfect.
Posted by Missing Link at 9:01 PM No comments: 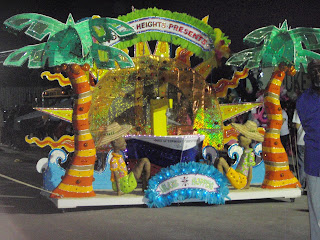 We left walking for the Junior Junkanoo about 6 pm as that was when it was scheduled to start and it never has started on time all the times we have attended. We arrived at 6:30 and the first school started around 8 pm.There were around 10 groups and the kids really put on a good show with a lot of drumming and fancy footwork. After we watched the last group pass us we started to walk back to the Marina, but we were able to hail a cab and able to ride back to the Marina in style (except for Gary on the floor in the back). Tomorrow will be a clean up the boat  and laundry day.
Posted by Missing Link at 2:25 PM No comments: 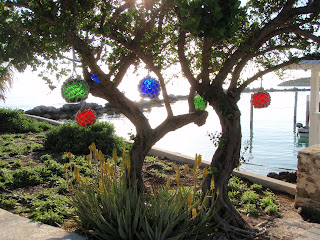 We had a good forecast so we took off for Great Guana Cay on Wednesday morning and had a great couple of days over there. We ended up staying at Orchid Bay Marina as they had a dockage special of $.50 per ft per night. By that evening we had  4 other boats from the Jibroom and we all had fun exploring, beach combing and people watching at Nippers Beach Bar. We went to the Wednesday night potluck at Grabbers Bar where there was quite a variety of foods to sample. On Thursday night we all decided to have our own happy hour on the Gazebo of the Orchid Bay docks and it was fun until the mosquitoes came out and had their own happy hour. the next morning we decided to head back to Marsh Harbour so that we could attend the Junior Junkanoo Friday night.

Posted by Missing Link at 2:12 PM No comments: 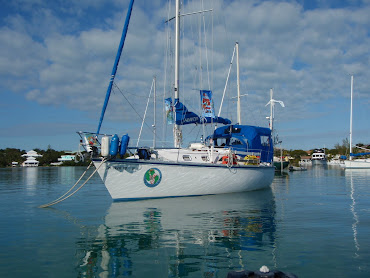 Our Pictures and Links